Investing in the Dividend Aristocrats from 2011

The Dividend Aristocrats index includes companies that are members of S&P 500, which have managed to raise dividends annually to their shareholders for at least 25 years in a row. This is an elite list of companies, most of which are worthy of further research by enterprising dividend growth investors.

The list was launched in 2005, and back-tested to include data going as far back as 1989. I generally like the companies on it, though I prefer the more detailed dividend champions list.

As part of my investment strategy, I focus on quality dividend growth companies. I view the ability to grow dividends annually for over a quarter of a century as a quality filter that is being met. Therefore, many Dividend Aristocrats fit the bill.

Of course, that doesn’t mean that all companies will succeed or are good investments today. It just means that these companies are good candidates for further research.

I went ahead and reviewed these companies, in order to see how they ended up doing in the subsequent 10 years.

You can view the list of companies from 2011 in thisarticle, including fundamentals information such as P/E, dividend yields. 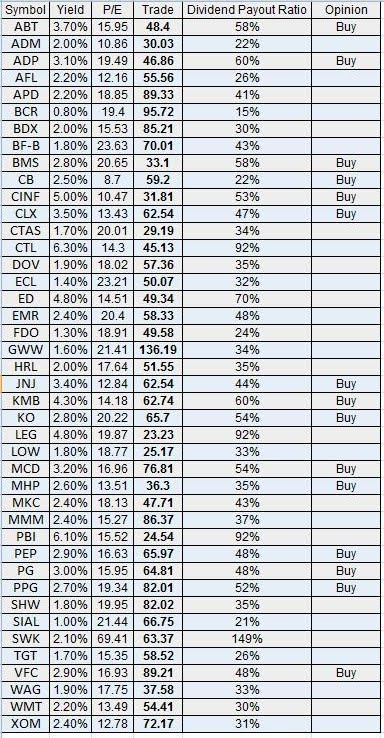 You can view the subsequent performance in this table below:

I reviewed the performance of each company. It looks like there were several companies that delivered outstanding total returns performance.

The fascinating part is that only two of these companies ended up cutting dividends. Those were Pitney Bowes and Century Link (now Lumen).

There were four companies that were acquired. This just goes to confirm my belief that many dividend aristocrats are good acquisition targets.

Actually, Chubb (CB) was acquired in early 2016 by Ace LTD (ACE), but since it took the name Chubb again, I was somehow able to calculate returns going forward.

I also calculated the yields on cost for an investor who bought in late 2010, when I originally posted the article. This was done only for the companies that were not acquired. It does include the companies that cut dividends down the road. 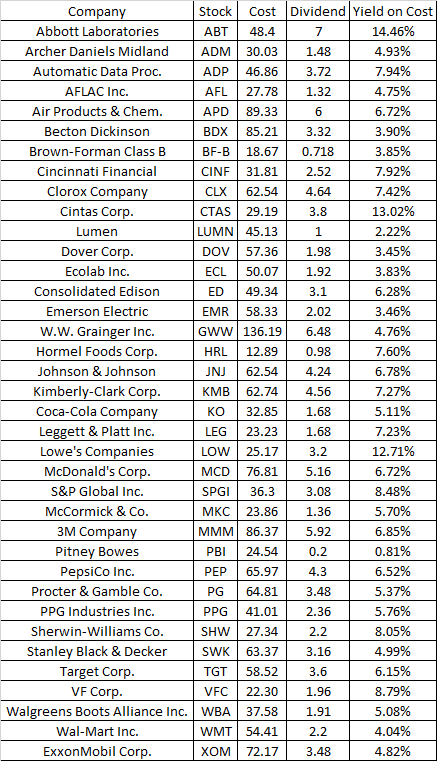 If you asked me what the best values were at the time, I would not have expected that these would be the best ideas.

I did specify a few of the values in my 2011 article, but did not expect Standard & Poor's Global (SPGI), Sherwin-Williams (SHW), and Cintas (CTAS) to be the best performers.

A few of the companies that didn’t do so well however, like Exxon (XOM), Coca-Cola (KO), were the types that I frequently talked about on this site.

Others I spoke frequently about were (to name a few) Johnson & Johnson (JNJ), Target (TGT), McDonald's (MCD), Wal-Mart (WMT), 3M (MMM), PepsiCo (PEP), and they did provide a decent return to shareholders.

All of this data goes to show me that the future is cloudy at best. Very few are able to forecast accurately, and position their investments in a way as to allow for maximum gain.

This is why I believe in diversification. If someone were to invest in equities, it makes sense to diversify widely. That gives you the best possible chance of owning a few of the investments that may turn out to be the best. That being said, you may still want to focus on quality, and not just randomly pick companies.

I do not believe in concentrating investments. That’s because you may be wrong, and if you have too much in a certain company, you may lose a little too much.

I believe in allocating investments equally. This gives each investment an equal chance of success.

However, once the money is allocated to the portfolio, I believe in letting each investment work its magic without touching it. I do not believe in micromanaging management, nor do I believe too much activity adds any value. On the contrary, I believe that too much monitoring may cause the investor to do something silly like selling the big winners early, and adding to the cheaper value traps that seldom deliver. You want to avoid cutting the flowers to water the weeds.

So in other words, I believe in letting the winners ride and rise for as long as possible. While I am a fan of diversification and equal weighting from the start, I am all for letting the winners become a concentrated positions merely because they are successful. I am not a fan of re-balancing. I am also beginning to warm up to the idea of automatically reinvesting dividends back in the same company that distributed them (DRIP).

Your opinions may be wrong. Your strategy may have blind spots. You need to be aware of that, and try to learn and create an environment that takes care of those blind spots.

I just find these types of articles to be really helpful for me. Hope they are as helpful to you too.