The Best Performing Sector of the 20th Century

One of my favorite publications is the Credit Suisse Global Investment Returns Yearbook. It lists a ton of historical data on the returns for several different markets and asset classes since the beginning of the 20th century. You can review the 2020 Yearbook from this location. 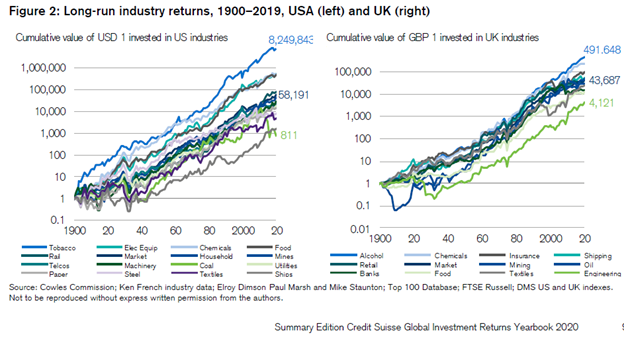 Tobacco was the best performing sector, as it turned a $1 invested in 1900 to over $8 million by 2020. This provides an annualized return of 14.20%. Alcohol was the second best performing industry, but its data started in 1927, so it didn’t span the whole 20th century.

The traditional argument as to why sin stocks tend to do well is because a certain portion of the investor population would not invest in them. As a result, they trade at a discount to intrinsic value, which results in larger profits for the investor. For example, if all else is equal in terms of earnings growth, a tobacco company selling at 10 times earnings and yielding 5% would generate better total returns over time than a soap maker that sells for 20 times earnings and yields 2.50%.

Some claim that this discount is warranted, given the increased regulatory and litigation risk. The fact that government could outlaw Tobacco or Alcohol is a possibility, albeit a very remote one. At least in the US, state and local governments are addicted to revenues from sales of tobacco products. It would be very difficult to find another venue that would replace lost revenues should the sales of tobacco and alcohol be banned.

The irony is that increased regulation on tobacco in particular have essentially created a lasting moat, or a barrier to entry, that makes it harder for new entrants into the market. 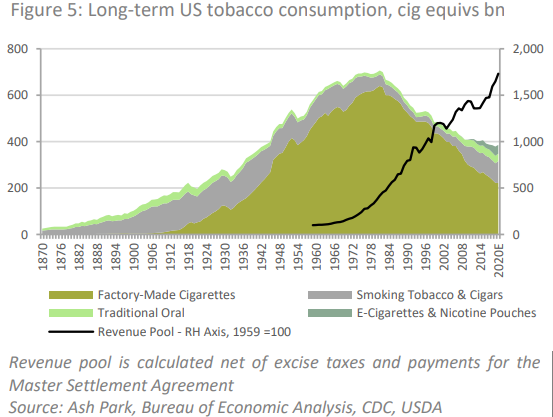 Tobacco and alcohol are addictive products, with tobacco more so than alcohol. Demand is inelastic, and people tend to smoke and drink no matter what the economy does. Historically, tobacco companies have managed to increase prices at a pace that is faster than declines in number of smokers. As a result, revenues and profits have increased, despite the decrease in number of smokers. There is brand loyalty, as smokers tend to stick to their type of cigarette.

Even Buffett has realized the strong brand loyalty and addictive nature of the product.

During the RJR Nabisco hostile takeover fight in 1987, Warren Buffett was quoted as telling the following to the CEO of Salomon Brothers:

"I'll tell you why I like the cigarette business. It costs a penny to make. Sell it for a dollar. It's addictive. And there's fantastic brand loyalty"

However, his remarks at the 1994 Berkshire Hathaway annual meeting point out his reasoning as to why he may not invest in the future: (Source)

"It is fraught with questions that relate to societal attitudes and those of the present administration. I would not like to have a significant percentage of my net worth invested in tobacco businesses. The economy of the business may be fine, but that doesn't mean it has a bright future"

He further explains his reasoning in the 1997 Annual Meeting. Notably, it is probably due to his personal ethical/moral beliefs and his belief on the company's prospects.

The 2020 edition included some additional research on ESG Investing, which seems to be in Vogue today. In my opinion, ESG investing is a way for asset managers to differentiate themselves and help them in charging higher fees to clients. I believe that investing for profit is already difficult. Assigning arbitrary ethical and moral standards on investments makes the job of an investor pretty much impossible. That’s because instead of evaluating investments on their merits, ESG focuses on arbitrary ethical beliefs. In essence, you are engaging in virtue signaling, instead of focusing on making money. If you are allocating money to serve your beliefs first, and wondering about profits second, you are basically engaging in charity. Nothing wrong with that, but this is not investing. I prefer to make my money investing rationally, and only then use my profits to allocate for my charitable beliefs. I do not expect companies to donate directly in accordance with my personal beliefs. That’s because everyone’s ideas on ethics/morality can differ, as they exist on a spectrum.

I believe that ethical investing does not exist. However, I am not going to impose my imperfect views of course. I do understand if some folks are against tobacco or alcohol, and I respect their views.

We do have some threats coming up in the smokeless and vapor products, that could jeopardize the traditional cigarette model. For some companies like Phillip Morris International and iQos, that's an opportunity. British American Tobacco also has some alternative brands. Altria could also do well with JUUL. We don't know which product consumers would like, and stick to however.

That being said, today I see several tobacco companies as being attractively valued.

BAT has managed to grow dividends annually since 1997.

The stock sells for 8.24 times forward earnings and yields 7.92%. Check my analysis of BAT for more information about the company.

Altria (MO), which manufactures and sells cigarettes, oral tobacco products, and wine in the United States.

The company has increased dividends for 52 years in a row.

This dividend king is selling for 10.43 times forward earnings and yields 7.10%. Check my analysis of Altria for more information about the company. 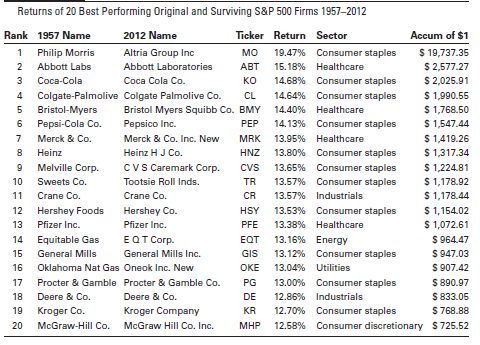 Source: Stocks for the Long Run
If your grandmother bought 40 shares (cost of $1,000) of Philip Morris in 1925 and joined its dividend reinvestment plan, her shares would have been worth over $1 billion dollars by the end of 2012.

Tobacco companies have delivered outstanding performance in the past century. However, they have not done so well over the past 4 - 5 years, which is why some investors are unsure about the sector.

On one hand, it looks like an opportunity to invest at a bargain price in an industry with strong economics, which has delivered dividends, earnings and total returns to shareholders for decades.

On the other hand, the market participants may be showing correctly that there are some risks that folks are not thinking about.

Given the high yields, it clearly shows that investors are viewing those companies as high risk. While the dividend payout ratios are high, they have historically been high as well. That being said, if management teams view clouds on the horizon, they will likely cut dividends. The odd part is that debt markets quote lower yields on bonds for tobacco companies like Altria, than the stock market. For example, Altria bonds due in 2039 sell at an yield of 4%. (Source)

Given the cheap rates on borrowing today, it may not be surprising if someone takes one of these tobacco companies private. That investment can pay off in a decade.

What is your opinion on tobacco stocks today? Please feel free to share in the comments below

- Warren Buffett and Charlie Munger on Investing in Tobacco Stocks

- Are you ignoring investment risks you know about?
- Altria Delivers Dependable Dividend Growth and High Total Returns
- What if Altria went to zero?
at 1:00:00 AM
Share
‹
›
Home
View web version