How dividends protect income from inflation 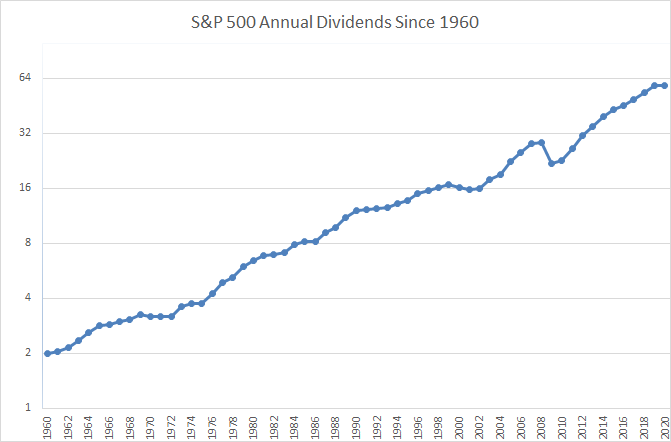 As an investor, I buy shares in companies that sell goods and services to consumers, and earn a profit in the process. Many of these companies have competitive advantages, which would allow them to pass on any sustainable cost increases to the final customers by raising prices.

This means that equities could turn out to deliver a good inflation protection. If companies grow earnings, they can distribute more to shareholders in the form of dividends. In other words, dividends tend to produce a stream of income that protects against inflation.

I looked at the data for S&P 500 dividends since 1960 in order to test this hypothesis. (Source)

I also obtained data on annual inflation in the US. (source)

It does seem that dividends have managed to exceed inflation in each decade since 1960. The exception is in the 1970s, when dividends trailed slightly behind inflation. However, stock prices lost a lot more ground to inflation. 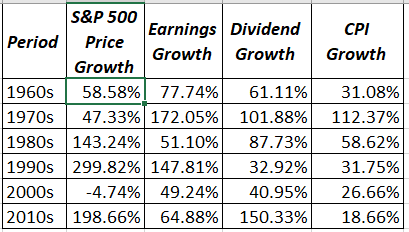 I tried to look at it by breaking it down by years. The period of high inflation in the US was between 1966 – 1981. During that time, inflation was just slightly above dividend growth. But if you spent dividends you largely maintained standard of living. 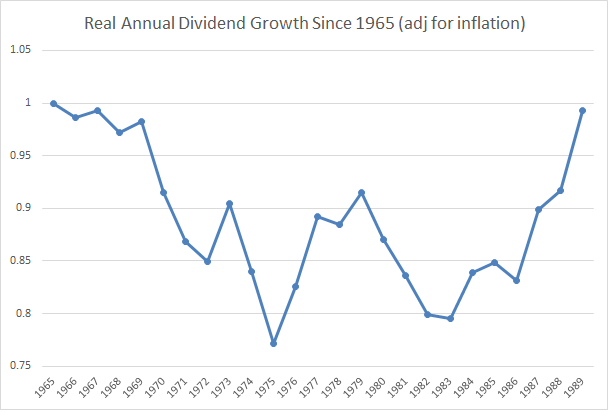 It looks like there were a few years where dividend income was lower at an inflation adjusted rate than 10 years earlier (1975). In other words, the purchasing power decreased by 25% through 1975, compared to 1965. But then it rebounded from there. 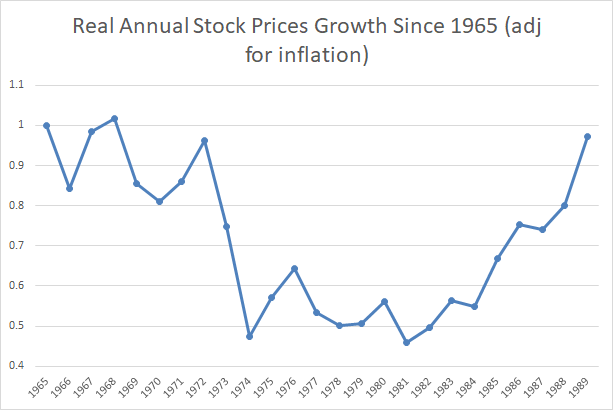 I do not have the data on Bonds, but interest income definitely lost purchasing power even more rapidly.

Overall, dividends have managed to provide a good protection against inflation. That being said, while dividends provide good inflation protection over time, that may not hold true in every single year. The period from 1965 - 1975 clearly indicates this.

The question for me is how would this affect me if I were retired and living off dividends between 1965 - 1975. I would probably have to look for ways to cut expenses in some areas, but not in others. The nice thing is that my personal basket of goods and services used will be different than the basket measured using CPI.

I can always try to adjust my spending and my budget. For example, if travel was a big expense, I may spend less time travelling to expensive destinations like Paris, France and go to cheaper locations. I may go for switching brands or I may go for stocking up on certain items earlier in the year. Of course, certain expenses like healthcare are more difficult to manage and forecast too.

In addition, while I used S&P 500 dividends as a proxy for dividend incomes in general, this is just a proxy. The portfolio of companies I would have invested in may have generate a dividend income stream that provides a better protection against inflation ( though it could be worse too if I chose poorly). Not all S&P 500 companies are dividend growth type however. The index includes a lot of cyclical names like U.S. Steel or General Motors, which tend to cut dividends during recessions, and are not dividend growth stocks. I tend to focus my attention on the companies that grow dividends annually, and have a track record for doing so. It also helps to analyze these companies, in order to understand if they can keep growing earnings and dividends. Having a competitive advantage, a strong brand name and a leadership position are big pluses in my book.

If I focus my attention on companies that grow dividends each year, I stand a better chance of growing my dividend income and protecting it against the ravages of inflation.

I obtained the historical dividends for three dividend growth stocks I thought about at the top of my head. I would argue that these are prominent large cap companies that have been prominent large and established companies for many decades, so it is reasonable to conclude that an investor would have had a chance of selecting them 55 years ago.

For example, Johnson & Johnson (JNJ) managed to grow real dividend income by a factor of 5 during the 1965 - 1981 period 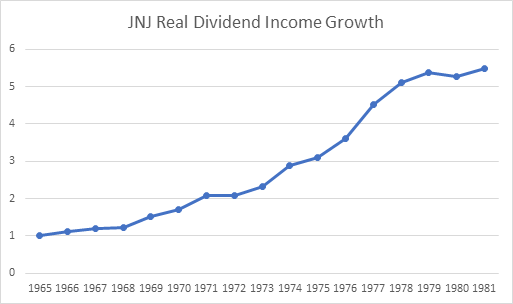 Procter & Gamble shareholders also saw a gradual increase in their inflation-adjusted dividend income, albeit at a much slower pace than Johnson & Johnson. 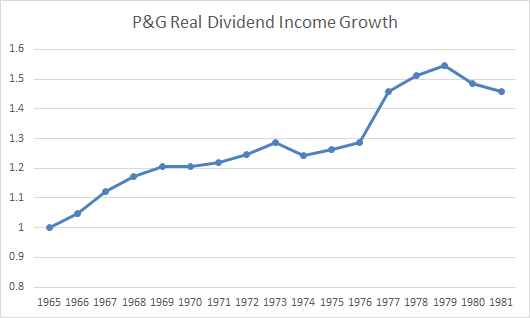 Coca-Cola shareholders also saw a gradual increase in their inflation-adjusted dividend income, albeit at a much slower pace than Johnson & Johnson, but faster than Procter & Gamble. 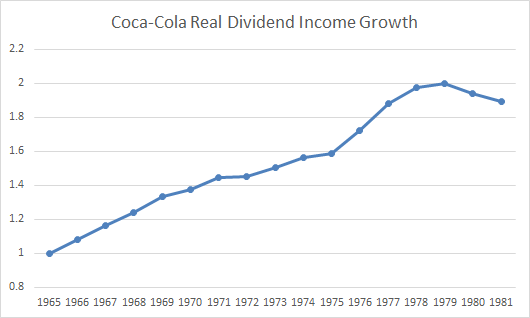 It looks like it has paid to be selective, when looking for dividend growth stocks that can grow dividends at or above the rate of inflation.

Thank you for reading. Please let me know what you think in the comments below.

- A Look Under the Hood For Inflation