The Dow Jones Industrials average is the oldest continuously updated stock index in the US. It was launched in 1896 by Charles Dow, who included 12 companies. The number of companies was later increased to 20 and finally in 1928 the number was increased to 30 companies.

It tracks the performance of 30 blue chip companies, which are representative of the US economy. Its holdings are selected by a five-member index committee at Standard & Poor’s/Dow Jones. This committee is basically comprised of the best stock pickers in the world, since they have managed to do better than most mutual fund managers and individual investors. They have done better than Buffett over the past 10 – 15 years as well.

The index made news last week, when it was announced that it would drop three members of the index, following the stock split in Apple’s shares. Since the index is weighted by the share prices of its components, Apple’s stock split would reduce it technology exposure.

A lot of investors believe that indices such as Dow Jones do better over time, because of new members. In reality, the opposite has been the case.

I recently read a study that shows how the companies that have been deleted from the Dow Jones Industrials Index between 1929 and 2006 have actually done much better than the companies that were added to the index. The study is titled " The Real Dogs of the Dow"

This study reminded me of the study of the original 500 members of the S&P 500 from 1957. This study had found that if someone had only invested in the original 500 members of the S&P 500 from 1957, they would have done better than the index themselves. That's because the companies that were added did worse than the companies that were removed from the index. You may read more about this study and my analysis here.

This is somewhat counter-intuitive. But it makes sense. The companies that are likely to be deleted are the ones that have suffered for a while, and they are down on their fortunes. As a result, investor expectations are low, which means that these shares are low too, as they are priced for the end of the world. The nice thing about such companies is that if the world doesn’t end, and they do just a little bit better, they can reward their shareholders handsomely. That’s because you will likely experience an expansion in the P/E, at the same time earnings and dividends are rising too.

On the other hand, the companies that are recently added to the index tend to have done very well. They are promising companies of the future. As a result, they sell at premium valuations. However, if these companies fail to live up to their lofty expectations, their returns may suffer, because investors may be willing to pay a lower P/E multiple. If profits do not grow as expected as well, it is likely that investors would also suffer from that as well.

As I mentioned above, I found a study that analyzed the substitutions in the Dow Industrials Index between 1928 and 2005.  The results were in line with what my expectations would be based on my research on the Corporate Leaders Trust and the Performance of the Original Members of S&P 500.

Over this period, there were 50 additions and deletions. In 32 of 50 cases, the deleted stock did better than the added stock.

Figure 1 shows that, with the exception of the 1990s, the Deletion portfolio consistently outperformed the Addition portfolio over the 76-year period. 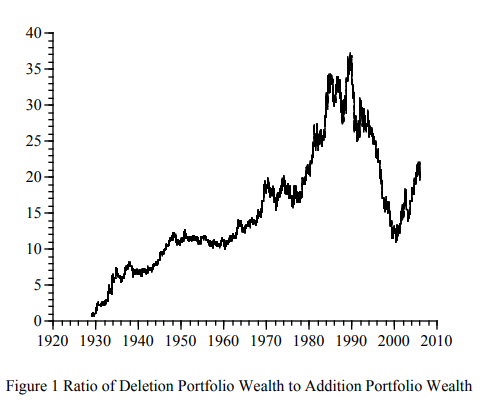 Figure 2 shows the ratio of the average deletion wealth to the average addition wealth each day over a ten-year horizon. The deleted stocks outpace the added stocks for approximately five years after the substitution date. Then their relative performance stabilizes 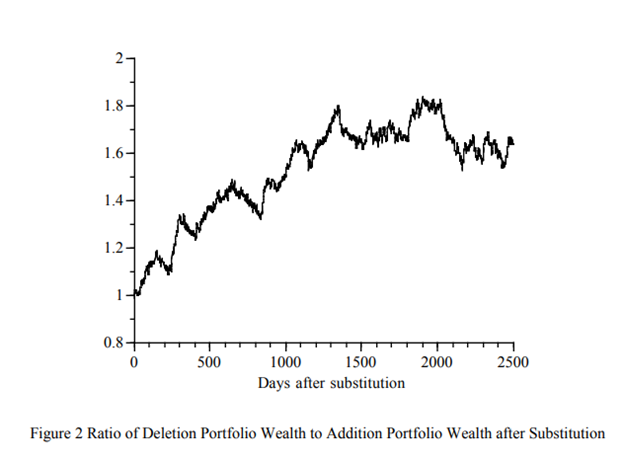 Table 4 summarizes the average levels of wealth for the Deletion and Addition stocks at 250- day intervals (approximately 1 year) over the five-year period following the substitution dates. 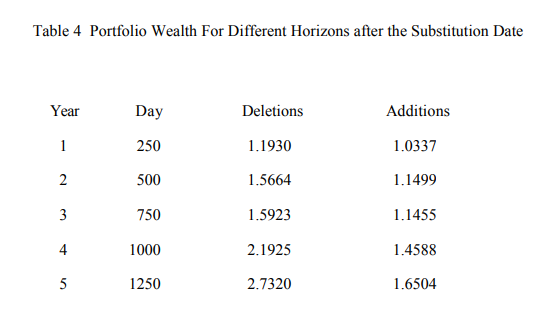 For example, the deleted stocks showed, on average, a 19.30% increase in value 250 trading days after the publication date, while the added stocks showed an average increase of only 3.37%. The differences in average wealth grow increasingly pronounced as the horizon lengthens.

The study had a fascinating conclusion.

A portfolio consisting of stocks removed from the Dow Jones Industrial Average has outperformed a portfolio containing the stocks that replaced them. This finding contradicts the efficient market hypothesis since changes in the composition of the Dow are widely reported and well known. Our explanation for this anomaly is the market’s insufficient appreciation of the statistical principle of regression to the mean, an error that has been previously identified in a variety of contexts and is no doubt present in a great many other contexts.

This is fascinating research, which spans a period of close to 80 years. The main point behind this research is reversion to the mean. Basically, a trend can only go so far, until it is reversed. It goes in both directions of course.

I did not calculate anything past 2019, since the information is still new. 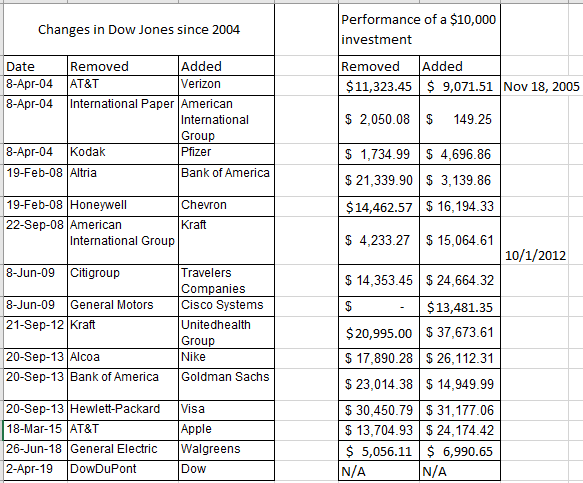 I present to you the data below. Again, please understand that I am one person who did this data analysis using free resources, such as dividendchannel.com. My data may be incomplete, or missing fields. I am not pulling it from an academic database, like all the other researchers.

The most interesting factor for me however was that since the research was published in 2005, I have found that the opposite has been the case.

In other words, the companies that were deleted did not do as well as the companies that were added to the list. Perhaps this is due to the way that things move faster these days in the globalized economy. The pace of change is faster, and the level of obsolescence is increasing as well. This just goes to show that success in investing is not going to be based on some simple formula that we can copy and paste and generate instant riches.

Another interesting piece of information relates to International Business Machines (IBM). The company was replaced by AT&T on March 14, 1939. I do not believe researchers were even able to find a reason behind the decision.

IBM did not get back into the index until June 29, 1979. At that point, the stock had increased in value by 562 times, which is incredible. AT&T stock had barely tripled over that 40-year period. You may read this excellent article on Dow Jones 22,000 point mistake.

I am mentioning this part in order to show that a large portion of the 1939 – 1979 outperformance of deleted companies over the added companies could be attributed to this decision.

By the time IBM was added to the index, it stopped growing. Chrysler was removed because it was very close to going under in 1979. It would have gone bankrupt, had it not been for Lee Iacocca, and a $1.2 billion bailout by the US Government. The stock went as low as $2/share in 1979, before rebounding all the way up to $50/share before the 1987 stock market crash.

This information comes from the book " Beating the Dow".

However, strategies and edges on Wall Street are not carved in stone. Things do change, either permanently or stay irrational for far longer than a follower of the strategy may remain solvent.

For example, if you look at performance of US Stocks versus International, US Small versus Large Cap, and Value versus Growth, you can see that they are generally cyclical. Those cycles can last many decades however. These long cycles may fool market participants that they are seeing a trend. Check the charts on this article " Dividends Are The Investors' Friend"

It is also possible that the excellent results of this reversion to the mean strategy may have been due to a fluke in the 1939 removal of IBM, which turned out to be a very successful corporation. It was further compounded by the removal of Chrysler, which turned out to rebound. What happened in 1979 with Chrysler may have caused an investor to buy General Motors in 2009, believing that they would experience the same type of turnaround. However, if you bought General Motors in 2009, you lost your entire nest egg. Again, history does not repeat, it just rhymes. This is why you have to learn from history, but you also have to realize that the same thing happening twice over a span of 30 years may have a totally different outcome.
Update: July 21, 2021
It looks like the three additions have not done as well as Dow Jones Industrials Average since August 31, 2020 (the date changes took place).

It also looks like the three deletions did much better than Dow Jones Industrials Average since August 31, 2020: