Last week, the company raised its quarterly dividend by 8% to 54 cents/share. This event marked the 42nd consecutive year of an increase in the dividend payment for Medtronic, which is a dividend champion and a dividend aristocrat.

"Medtronic's strong and growing dividend is an important component of the total return we expect to deliver to our shareholders," said Omar Ishrak, Medtronic chairman and chief executive officer. "Our board and management team have great confidence in Medtronic's ability to generate significant cash flow, and we expect to balance the deployment of this capital through both disciplined investments to drive future growth and returning cash to shareholders."

Medtronic is a very interesting example on the limitations of using earnings per share on a GAAP basis. Understanding its true earnings power requires a little bit of extra work on the hands of the investor. For example, in my analysis of the company I use non-gaap earnings per share of $5.22 for 2019, $4.77 in 2018 and $4.60 in 2017, rather than the $3.41, $2.27 and $2.89 in GAAP EPS. For example, certain items related to the amortization of intangible assets will depress earnings per share by at least $1.10/year for a long time. This is purely an accounting term, meant to satisfy a FASB requirement, which doesn’t impact long-term earnings power of the business. The company raised NON-GAAP earnings per share from $2.60 in 2008 to $5.22 in 2019. Medtronic is estimated to grow earnings to $5.44/share - $5.50/share in 2020. You may review the latest press release for more details. 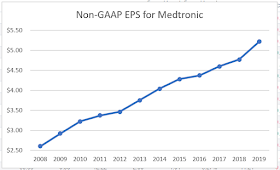 The growth in earnings per share will be achieved by introductions of new devices, strategic acquisitions, cost containment initiatives as well as increase in foreign sales. The company acquired Covidien in 2015, and is working on realizing synergies. By moving its headquarters from the US to Ireland, the company reduced its corporate tax rate from 35% to 12.50%. Some cost containment initiatives that Medtronic had started a few years ago are starting to bear fruit. Another factor that could help EPS growth is the consistent repurchase of stock by the company. New initiatives as well as expanding into non-traditional markets, could bolster growth. Last but not least, emerging markets such as China and India could present solid opportunities for growth, as emerging markets in general could deliver double digit percentage increases in sales over the next decade.

The medical equipment market is highly competitive and is characterized by short product life cycles. However, the scale of Medtronic’s operations, its continued investments in innovation as well as its diverse nature of procedures offset some of the risks mentioned in the previous sentence. 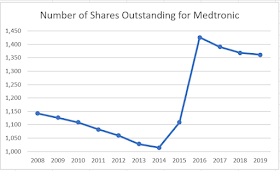 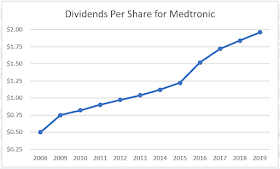 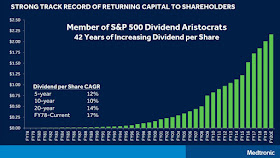 One thing I wanted to mention addresses the question on foreign withholding taxes on Medtronic dividends. Residents of the United States are not subject to a 20% withholding tax on Irish dividends. 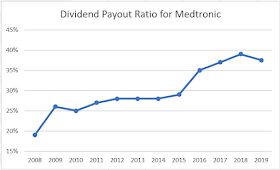 I find the stock to be fairly valued today at 19 times forward earnings. Medtronic yields 2.20% based on the new dividend payment.